“My name is Mary Katherine Blackwood…”

Read an extract from Shirley Jackson’s dark masterpiece, We Have Always Lived in the Castle, which is Waterstones’ Rediscovered Classic for October. 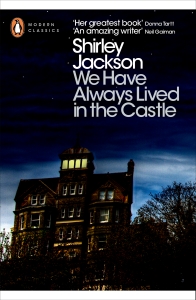 My name is Mary Katherine Blackwood. I am eighteen years old, and I live with my sister Constance. I have often thought that with any luck at all I could have been born a werewolf, because the two middle fingers on both my hands are the same length, but I have had to be content with what I had. I dislike washing myself, and dogs, and noise. I like my sister Constance, and Richard Plantagenet, and Amanita phalloides, the deathcup mushroom. Everyone else in my family is dead.

The last time I glanced at the library books on the kitchen shelf they were more than five months overdue, and I wondered whether I would have chosen differently if I had known that these were the last books, the ones which would stand forever on our kitchen shelf. We rarely moved things; the Blackwoods were never much of a family for restlessness and stirring. We dealt with the small surface transient objects, the books and the flowers and the spoons, but underneath we had always a solid foundation of stable possessions. We always put things back where they belonged. We dusted and swept under tables and chairs and beds and pictures and rugs and lamps, but we left them where they were; the tortoise-shell toilet set on our mother’s dressing table was never off place by so much as a fraction of an inch. Blackwoods had always lived in our house, and kept their things in order; as soon as a new Blackwood wife moved in, a place was found for her belongings, and so our house was built up with layers of Blackwood property weighting it, and keeping it steady against the world.

It was on a Friday in late April that I brought the library books into our house. Fridays and Tuesdays were terrible days, because I had to go into the village. Someone had to go to the library, and the grocery; Constance never went past her own garden, and Uncle Julian could not. Therefore it was not pride that took me into the village twice a week, or even stubbornness, but only the simple need for books and food. It may have been pride that brought me into Stella’s for a cup of coffee before I started home; I told myself it was pride and would not avoid going into Stella’s no matter how much I wanted to be at home, but I knew, too, that Stella would see me pass if I did not go in, and perhaps think I was afraid, and that thought I could not endure.

If anyone else came in and sat down at the counter I would leave my coffee without seeming hurried, and leave, nodding goodbye to Stella. “Keep well,” she always said automatically as I went out.

I chose the library books with care. There were books in our house, of course; our father’s study had books covering two walls, but I liked fairy tales and books of history, and Constance liked books about food. Although Uncle Julian never took up a book, he liked to see Constance reading in the evenings while he worked at his papers, and sometimes he turned his head to look at her and nod.

“What are you reading, my dear? A pretty sight, a lady with a book.”
“I’m reading something called The Art of Cooking, Uncle Julian.”
“Admirable.”

We never sat quietly for long, of course, with Uncle Julian in the room, but I do not recall that Constance and I have ever opened the library books which are still on our kitchen shelf. It was a fine April morning when I came out of the library; the sun was shining and the false glorious promises of spring were everywhere, showing oddly through the village grime. I remember that I stood on the library steps holding my books and looking for a minute at the soft hinted green in the branches against the sky and wishing, as I always did, that I could walk home across the sky instead of through the village. From the library steps I could cross the street directly and walk on the other side along to the grocery, but that meant that I must pass the general store and the men sitting in front. In this village the men stayed young and did the gossiping and the women aged with grey evil weariness and stood silently waiting for the men to get up and come home. I could leave the library and walk up the street on this side until I was opposite the grocery and then cross; that was preferable, although it took me past the post office and the Rochester house with the piles of rusted tin and the broken automobiles and the empty gas tins and the old mattresses and plumbing fixtures and wash tubs that the Harler family brought home and—I genuinely believe—loved.

The Rochester house was the loveliest in town and had once had a walnut-panelled library and a second-floor ballroom and a profusion of roses along the veranda; our mother had been born there and by rights it should have belonged to Constance. I decided as I always did that it would be safer to go past the post office and the Rochester house, although I disliked seeing the house where our mother was born. This side of the street was generally deserted in the morning, since it was shady, and after I went into the grocery I would in any case have to pass the general store to get home, and passing it going and coming was more than I could bear.

I was always puzzled that the people of the village, living in their dirty little houses on the main highway or out on Creek Road, smiled and nodded and waved when the Clarkes and the Carringtons drove by; if Helen Clarke came into Elbert’s Grocery to pick up a can of tomato sauce or a pound of coffee her cook had forgotten everyone told her “Good morning,” and said the weather was better today. The Clarkes’ house is newer but no finer than the Blackwood house. Our father brought home the first piano ever seen in the village. The Carringtons own the paper mill but the Blackwoods own all the land between the highway and the river. The Shepherds of Old Mountain gave the village its town hall, which is white and peaked and set in a green lawn with a cannon in front. There was some talk once of putting in zoning laws in the village and tearing down the shacks on Creek Road and building up the whole village to match the town hall, but no one ever lifted a finger; maybe they thought the Blackwoods might take to attending town meetings if they did. The villagers get their hunting and fishing licenses in the town hall, and once a year the Clarkes and the Carringtons and the Shepherds attend the town meeting and solemnly vote to get the Harler junk yard off Main Street and take away the benches in front of the general store, and each year the villagers gleefully outvote them. Past the town hall, bearing to the left, is Blackwood Road, which is the way home. Blackwood Road goes in a great circle around the Blackwood land and along every inch of Blackwood Road is a wire fence built by our father. Not far past
the town hall is the big black rock which marks the entrance to the path where I unlock the gate and lock it behind me and go through the woods and am home.

The people of the village have always hated us.

We Have Always Lived in the Castle by Shirley Jackson (Penguin Modern Classics) is Waterstones’ Rediscovered Classic for October.
Discover more about Shirley Jackson, in this introduction from Women’s Prize for Fiction Winner, A. M. Homes.