Halas & Batchelor studio’s classic and controversial animation of Animal Farm, was the first ever British animated feature film. This landmark illustrated edition of Orwell’s novel was first published alongside it, and features the original line drawings by the film’s animators, Joy Batchelor and John Halas, some of which feature in this extract. 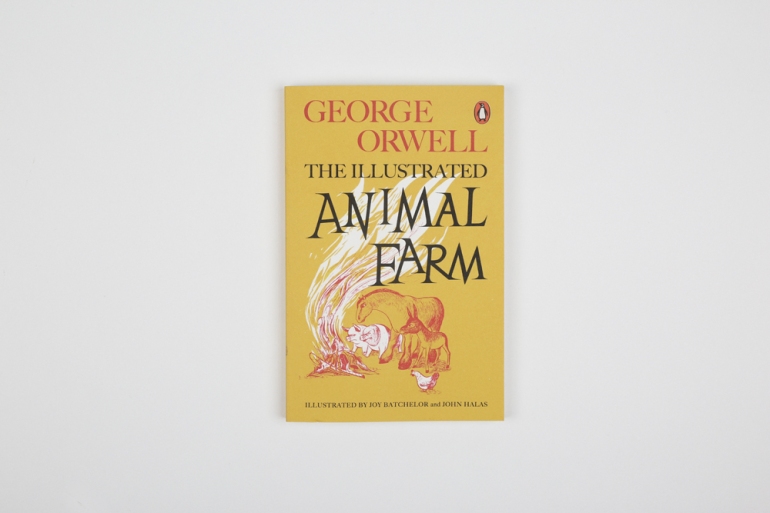 Old Major cleared his throat and began to sing. As he had said, his voice was hoarse, but he sang well enough, and it was a stirring tune, something between ‘Clementine’ and ‘La Cucuracha’. The words ran:

Beasts of England, beasts of Ireland,

Beasts of every land and clime,

Hearken to my joyful tidings

Of the golden future time.

Soon or late the day is coming,

Tyrant Man shall be o’erthrown,

And the fruitful fields of England

Shall be trod by beasts alone.

Rings shall vanish from our noses,

And the harness from our back,

Bit and spur shall rust forever,

Cruel whips no more shall crack.

Riches more than mind can picture,

Wheat and barley, oats and hay,

Shall be ours upon that day.

Bright will shine the fields of England,

Purer shall its water be,

Sweeter yet shall blow its breezes

On the day that sets us free.

For that day we all must labour,

Though we die before it break;

Cows and horses, geese and turkeys,

All must toil for freedom’s sake.

Beasts of England, beasts of Ireland,

Beasts of every land and clime,

Hearken well and spread my tidings

Of the golden future time.

The singing of this song threw the animals into the wildest excitement. Almost before Major had reached the end, they had begun singing it for themselves. Even the stupidest of them had already picked up the tune and a few of the words, and as for the clever ones, such as the pigs and dogs, they had the entire song by heart within a few minutes. And then, after a few preliminary tries, the whole farm burst out into ‘Beasts of England’ in tremendous unison.

The cows lowed it, the dogs whined it, the sheep bleated it, the horses whinnied it, the ducks quacked it. They were so delighted with the song that they sang it right through five times in succession, and might have continued singing it all night if they had not been interrupted.

Unfortunately, the uproar awoke Mr Jones, who sprang out of bed, making sure that there was a fox in the yard. He seized the gun which always stood in a corner of his bedroom, and let fly a charge of number 6 shot into the darkness. The pellets buried themselves in the wall of the barn and the meeting broke up hurriedly. Everyone fled to his own sleeping place. The birds jumped on to their perches, the animals settled down in the straw, and the whole farm was asleep in a moment.

Animal Farm: The Illustrated Edition by George Orwell is published by Penguin Classics on the 27th August.