The story behind the making of Esio Trot with Richard Curtis

What do you get when you combine a tale by the world’s number one storyteller, the scriptwriter of Notting Hill, and lots and lots of tortoises? Esio Trot! For the first time this Christmas, Roald Dahl’s story is being brought to life, and screenwriter Richard Curtis tells us how he and the team went about adapting the story of Mr Hoppy and Mrs Silver for the big screen.

Have you always been a Roald Dahl fan?
RC: Roald Dahl is one of the most read-out-loud authors in my house; the family love Boy: Tales of Childhood and I’ve read The Witches numerous times to my children. In my opinion, Dahl is this generation’s version of Charles Dickens. There is something completely extraordinary and unique about him as a writer. 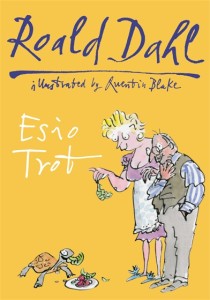 Where did the journey of adapting Roald Dahl’s Esio Trot begin for you?
It never occurred to me that I might one day adapt a Roald Dahl story, but after reading it to my youngest son, it struck me that this was a perfect romantic comedy. Not only that, it was about an older generation which I had been interested in writing about for a long time. Louis Armstrong’s music came to me in that exact moment, who is a great favourite of my dad’s. So I put on the Hello Dolly soundtrack and immediately knew that was the mood and atmosphere I wanted. In a funny way, Esio Trot is the film I always wanted to write about my parents. They loved each other since they were in their twenties and were very happy, but it made me wonder about the people who didn’t find love until a lot later in life.

When did you decide to write Roald Dahl’s Esio Trot with Paul Mayhew-Archer?
The moment I came up with the idea to adapt Esio Trot, I knew I should write it with Paul; he is the most delightful, hardworking man in the world. We had previously worked together on The Vicar Of Dibley, which was similar in a way to Road Dahl’s Esio Trot, as it was a comedy with affectionate warmth. In the same way that Dahl’s stories haven’t aged, we were careful to make this adaptation modern but timeless. We knew we had to make it funny to honour Dahl’s humour, so we would challenge each other by leaving the note ‘CBF’ (could be funnier) in the margin for each other.

With Quentin Blake’s memorable illustrations, how easy was it to develop the look of the film?
Quentin Blake’s illustrations are brilliant and very distinctive. But the moment I started to write the script and give the characters a background and a voice, they started to disappear from my mind. While we were making the film, I said to Judi I thought she looked like the woman in Blake’s illustrations. She took terrible umbrage to this; she thought the illustrations of Mrs Silver had a pointy nose and stupid hair. She gave me a photocopy of one of Blake’s drawings with the words ‘You’re fired’ written underneath it the next day! 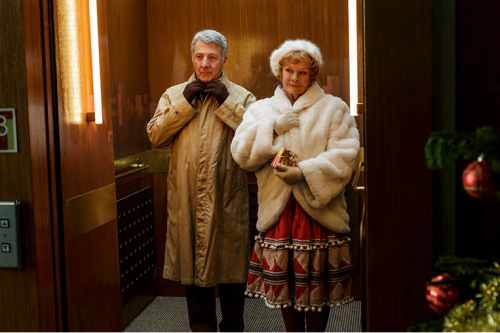 What was the casting process like for Esio Trot?
The casting process for any project is a very mysterious thing. I’ve always wanted to do something with Judi, so when I realised I was writing something about an older couple it struck me that my dream might come true. We heard back from Judi saying she wouldn’t let anyone else play Mrs Silver apart from her; the fact that she agreed still amazes me. We all thought there would be no harm in sending the script to Dustin, it was a whimsical idea. It was miraculous when he came back with a yes!

How did you, Judi and Dustin begin the characterisation of Mrs Silver and Mr Hoppy?
We had very few conversations with Judi about her character; she came to her own conclusion of how she wanted to play Mrs Silver with this astonishing, optimistic radiance. It was only on the third readthrough that she decided to adopt a northern accent for the role. The process with Dustin was rather different. He wanted to talk through at length every scene and the motivation behind the character of Mr Hoppy.

What kind of relationship did the two of them have filming together?
The wonderful thing about their relationship is that they gave each other the comfort of knowing the other part was going to be perfectly played. It was lovely to see them feel entirely confident in each other.

How do the characters of Mrs Silver and Mr Hoppy develop through Roald Dahl’s Esio Trot?
Judi was determined to give the most passionate, delightful and slightly stupid performance all the way through the film. You see the depth of Mrs Silver’s character when she’s hurt by what Mr Hoppy has done. Dustin was different as we had to hold back the twinkle in his eye, otherwise the audience wouldn’t understand why Mr Hoppy hadn’t already asked Mrs Silver for a date. So Dustin developed Mr Hoppy by showing glimmers of joy increasingly flicker across his face until the end of the film.

What were you looking for in Mr Pringle?
Mr Pringle was difficult to cast. With two extraordinary actors, the last thing we wanted was a stereotypical bad character. I couldn’t think of a way the part could be done well until Richard Cordery auditioned. He created a lovely character journey for Mr Pringle. When the film begins, there is nothing unpleasant about him, then he becomes a bit selfish, then a little lascivious and then finally he becomes a malicious man.

Why was James Corden chosen to be the narrator?
We felt the narrator was an opportunity to make the film quite informal and modern. We cast James because he could provide a perkiness to the story; he has enormous warmth without sentimentality, which was perfect for narrating Roald Dahl’s Esio Trot.

What was it like to make a film with so many tortoises?
We knew the tortoises were going to be magnificent when we were writing the script. But the reality of seeing them all on screen was wonderful, much like how you feel when you have a great cast. Some moments were daunting; was Dustin going to do a serious monologue to a tortoise? Is Judi going to have to kiss a tortoise and sing a song to one? Thankfully, the tortoises turned out better than expected; they were better behaved and were hilarious en masse.

How do you hope the audience will react to Roald Dahl’s Esio Trot?
I’m tremendously pro-Christmas. White Christmas is my favourite film and I remember how determined I was to have Love Actually set at Christmas. The first film I ever wrote was called Bernard and the Genie, which was an hour long Christmas production for the BBC and since then I’ve made Christmas specials of The Vicar Of Dibley and Blackadder for them. So it’s an absolute joy being back with the BBC to do something warm and lovely for Christmas again. I love the idea that Roald Dahl’s Esio Trot might be part of a New Year’s afternoon when a 10 year old, a 45 year old and a 65 year old can all watch it together.

Esio Trot will be airing on BBC One on New Year’s Day at 6.30pm. For even more behind the scenes from the Roald Dahl Museum archive visit the Roald Dahl website. You can also find out how to make your very own tortoise cosy, over on the Puffin blog.